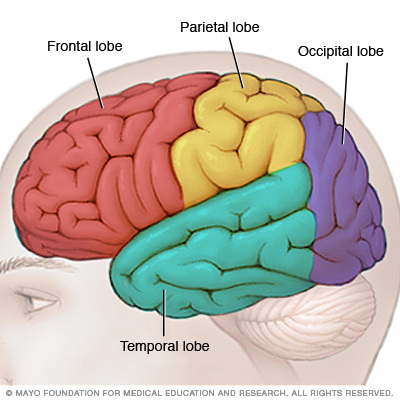 Our brain is the most essential organ to our body that we know of. The brain controls from what we think, to what we feel to what we do. The brain is made up of many structures, each with their own individual function, but it is primary made up of four main lobes in its cerebrum.


The frontal is the most vulnerable lobe out of the four. As indicated by its name, the frontal lobe is located in the frontal region of the brain. The Frontal Lobe controls many essential functions including motor functions, higher order functions, planning, reasoning, judgement, impulsive control, memory.


The frontal lobe is made of three area: the prefrontal area, the premotor are and the motor area. In the prefrontal area, personalities expression  and  the planning of cognitive behaviors occur in the area. In both the premotor and motor area, nerves controlling voluntary muscle movement are contained.  The brain can take direct control of the spinal cord area through the motor cortex while the premotor's job is to monitor movement sequence using sensory feedback

The Parietal Lobe is located behind the Frontal Lobe and above the Occipital Lobe of the brain.  The lobe contains functions such as processing sensory information ( i.e taste, touch and temperature, ect.) occurs. Another function of this lobe is the unconscious awareness of our body parts. The Parietal lobe keeps notice of the location of our body parts and because of that we are able to move around without running into every little thing.

The temporal lobe functions in interpreting sound and language around us. The temporal lobe contains structure of the brain such as the amygdala, the limbic system, the hippocampus, and the olfactory cortex. The Auditory Cortex of the temporal lobe processes sound along with volume and pitch, dispenses sounds. It is essential to comprehending the spoken language and is concerned with tasks such as finding out and separating the auditory objects. The Wernicke’s area is the  region where spoken language is understood and the Angular Gyrus contains functions in relation to cognitive skills (i.e processing language, mathematics, ect.).

The word Occipitial roots from the word occiput which means "the back part of the head". Like its root meaning, the Occipitial Lobe is located in the back region of our brain. Functions of this area of the brain include interpreting visual stimuli and information which means that information received from the retina in our eyes is interpreted in this lobe. The visual cortex in the occipital lobe receives the impulses sent from the eye to portray image of what is seen and in one part of the visual cortex, flips images sent from the eye to right-side up. It can also show images of one’s memory and imagination.


Brainstem:  It is  responsible for basic vital life functions such as breathing, heartbeat, and blood pressure. It includes the parts of the:

•Pons: They are involved in motor control and sensory analysis. It contains parts that are important for the level of consciousness and for sleep. Some structures are linked to the cerebellum and are in turn involved in movement and posture.


•Medulla: Responsible for maintaining vital body functions such as breathing and heart rate. It is located between pons and spinal cord.

Thalamus: Nearly all sensory information enters this structure of the brain where neurons send information to the overlying cortex. Axons from every sensory system (excluding the olfaction or smell) synapse here as the last relay site before information reaches the cerebral cortex


Limbic system:   Involved in the role of  emotions, memory and attention.

•Pituitary Glands: It is an endocrine gland involved in homeostasis. It regulates other endocrine glands in the body such as the Hypothalamus, the testes and ovaries, thymus, thyroids, ect.


•Amygdala It is located in the temporal lobe and is involved in memory, emotion, and fear and alert to threats. It causes a bulge on the surface front of the medial part of the Temporal lobe (uncus).


•Hippocampus Important in the involvement of the formation of new memories and is also associated with learning and emotions.


•Hypothalamus Monitors numerous bodily functions such as blood pressure and body temperature, as well as control over body weight and appetite. (Located at the base of the brain where hormone and brain signals interact)

For more information about the brain and more parts and structures of it, watch out the videos below.

It is not only important to your body, but to your mind as well. It is important that you know what food and things can effect you brain both positively and negatively.


Positive Influences: Foods and Their Effects

Proteins.Proteins such as milk, meat eggs, cheese, fish, and beans have positive effects on the brain. They produce dopamine and norepinephrine which increases alertness (Tyrosine) and and concentration. Proteins are also the source of amino acids which are the buildings blocks of networks in your brain.

Fats. A calories can be good, they can also be bad. Excess calories in a meal is associated with decreased alertness and concentration. It also reduces blood flow to the brain.


Drugs. Drugs may temporarily stimulate pleasure in the brain but its effects are severe. Drugs inhibit the brains natural production of neurotransmitters such as norepinephrine and dopamine and causes reliance on the ones stimulated by the truge (cause of drug dependence). Drugs also evoke depression, changes in behavior, change in brain structures and a range of other negative effects of not only to the brain but to the mind as well.

When participating in sports, we leave our body out to be harmed by any type of possibility. Therefore its important to keep our bodies safe-- especially our brains.

Damage to any of the four regions of our brain can cause different effects. Damage to the Temporal Lobe causes problems with memory (especially for sounds and music), speech, perceptions, and language skills. In some cases , it can cause personality changes in individuals. Frontal Lobe damage is more high risked because our Frontal Lobes are more vulnerable in location. Damage includes  difficulty in interpreting feedback from one's surrounding environment. It also causes change in sexual habits, socialization and attention.Damage to the Occipital Lobe causes visual problems such as difficulty in recognizing objects, colors, words and even faces. There can also be cortical blindness and failure to see.. Seizures in this region can cause hallucination. Damage to the Parietal Lobe can provoke an inability to do simple task, cause individuals to be usually confused, inability to tell left from right, and problem with verbal memory and language. There will also be trouble in identifying sensation location and type, recognizing objects by touch, and numbness to one side of the body while the other has impaired sensations.

It is important to make sure all of your body, especially your head, is protected when being active!

The Brain and Exercise ( And Relieving Stress)

Exercise is not only good for your body, but your mind (your brain) as well. When you get active, it has several effects on the body such as helping your memory and relieving stress.

When you exercise your heart rate increases, blood starts pumping, all of which brings the needed oxygen and more to your brain. The pumped oxygen along with the release hormones the occurs with exercise, your brain cells are being nourished and stimulated to grow. In research (most with studies of rat) it is seen that the use of exercise stimulates the regrowth of the hippocampus which is prone to shrinkage with declining age.

Getting Rid of Stress


Stress can come to us at any week, day, hour, or even minute. Stress can be cause by extreme catastrophes of the things that happen in the world around us (such as natural disasters or wars) to daily events that happen to us all (long lines in stores, traffic, too much work to do, ect.). If you let stress build up inside of you it not only can cause anger and aggression, or mild headaches, but it also weakens your immune system. When stress is built up, you brain isn't focused on its regulation of your immune system, leaving it open and vulnerable.


One method to relieve stress is to stay positive. Being happy and laughter is proven to help relieve tension. Another method in relieve your stress is to let it out physically. You can engage yourself in a sport, go for a walk, participate in aerobic exercises or even look into something as simple as dancing and having fun. Taking even four or five minutes out of your day to let physical exercise release some of your body endorphin to help you feel happier.

Motivating Your Brain and Yourself 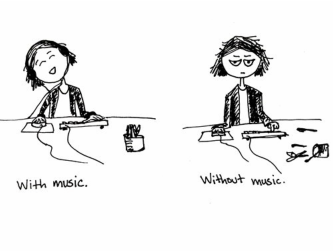 There may be times when you you want to do something but you can't seem to reach into yourself and get yourself moving. That's where motivation comes in. Motivation is defined psychologically as "a need or desire that energizes and directs behavior" ()Well the brain is what the mind is, and if you want to motivate yourself you should know (1)  how you get motivated and (2) what you can do to get motivated.

Dopamine
Dopamine is a neurotransmitter inside the brain that helps control the brain's reward and pleasure center. Although most people might know dopamine for its drug related interaction, there is Dopamine already present naturally in our brain. Dopamine not only controls the reward center but it also regulates movement, attention and emotion. Studies indicated that dopamine releases in the body when we are especially at moments of high stress. This brings to light that since dopamine releases before the actual reward itself, its main function is actually to get us motivated to achieve something good or avoid things that are bad.


Tips for Motivating Yourself


1) Get in touch with your inner Dopamine. Find ways to release your dopamine to get your mind and body going. Drinking things such as Coffee is know to release dopamine but healthier ways such as eating fruits in vegetables. (Because dopamine oxidizes easily, it is recommended you eat plenty of fruits and vegetables.)

2) Eat food. When your have food in your system, you are fueling your body with the calories and energy you need to do your desired task. However, eating healthier foods is a better way in supplying energy to your body

3) Set a reward for yourself. People tend to work better and with more motivation when they have something to work for. This could range as rewarding yourself with a cheating desert or even buying yourself something good. As long as you have something in the long run to work yourself towards, anything is okay.


5) Make your task fun. No task can be done when it is tedious and boring to ourselves, it only makes it harder to achieve what we want. Therefore, make yours task fun and engaging-- create a game for yourself or listen to music to get you going.


6) Dont Give up. The worst thing to do is giving up. Stay positive and keep your goal in mind. The results will be worth it.